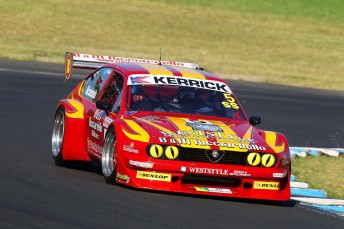 The trophy, introduced to honour the former series champion who passed away late last year, will be awarded to the winner of Race 3 of the opening round of each season.

Ricciardello’s Alfa GTV led home the Aston Martin of Kerry Baily by in excess of 11 seconds in the trophy race.

Baily was second for the weekend after recording fourth and second place results in Races 1 and 2 respectively.

Darren Hossack had been Ricciardello’s closest rival in Race 1 but failed to finish the second race to due a mechanical failure on his Audi.

The former series winner  charged through the field to once again challenge Ricciardello in the final before a spin at Turn 1 spun Hossack into the barriers and out of the race.

Jeff Barnes had taken third in Race 2 on the very last lap from Shane Bradford, but saw his weekend end on a sour note with a failure to finish in the final.

Queenslander Kane Baxter-Smith held up Ford honours with third for the weekend.

Neale Muston made it two wins from two starts in the second round of the Radical Australia Cup, while Russell Jamieson and Chris Barry proved too good in the Superkart and PRB Clubman contests respectively.