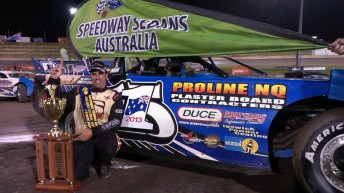 Queenslander Matt Pascoe has taken out the 2013 Australian Super Sedan Speedway title at the Perth Motorplex, working hard to take victory in the 20 car feature race.

Pascoe – who started his career as a racecar builder before getting behind the wheel – worked his way through from ninth on the grid to the lead in the 40 lap affair that ran lights to flag – a rarity in the history of the Australian Super Sedan Championship.

“All weekend we have been chasing the set-up just to make sure we can run the bottom and the top,” said the likeable Queenslander. “We didn’t win a heat but it’s the main one that counts. We put a basic set-up back in it and it just honked along again.”

Oldfield was a last minute substitute for Tasmanian Brad Smith, who couldn’t compete in the title due to injury. He started on the front row and very nearly brought the house down with a home victory – itself a rarity for West Australian competitors.

The other front row starter – Marc Giancola (another West Aussie), drifted back to sixth at the finish.