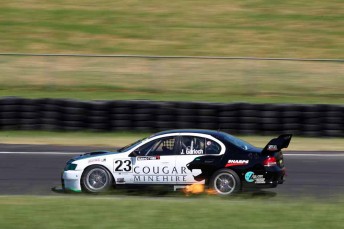 Justin Garioch has taken opening round honours in the Kumho V8 Touring Car Series at Sydney Motorsport Park after an incident-packed Race 3.

The winner of Races 1 and 2, Garioch crossed the line just 11th in the final after coming off worst in a three-way, last lap, battle for second that also involved Terry Wyhoon and Morgan Haber.

While a race win for Shae Davies appeared to hand the Carrera Cup regular a round victory on debut, a post-race penalty to Haber for a separate incident with Nathan Assaillit elevated Garioch to 10th, securing the Garioch Racing driver the weekend honours.

Davies leads the series after Round 1, however, as Garioch was handed a post-race penalty of his own for early contact with Tony Evangelou.

Wyhoon rounded out the weekend podium behind Garioch and Davies.

The Image Racing owner/driver had led Race 3 until a Safety Car restart with two laps remaining, after which he was the victim of a series of aggressive passes that left him fifth (which subsequently became fourth) at the finish.

Chris Smerdon and Steve Briffa had been fifth and seventh respectively at the restart but fought through the carnage to take second and third.

That left the pair fourth (Smerdon) and fifth (Briffa) in the round ahead of Haber, Matt Hansen, Evangelou, Assaillit and Jim Pollicina.

Haber had earlier been lucky to escape penalty in Race 2 after a lunge on Evangelou into Turn 1 sent the Caterpillar Falcon spinning off the circuit and into retirement.

The series continues with the Shannons Nationals at Mallala Motorsport Park in April.