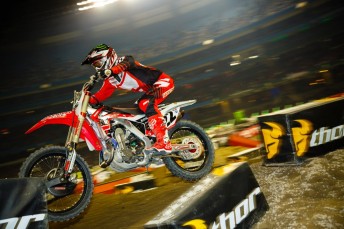 TwoTwo Motorsports Chad Reed will undergo a second operation on the knee he injured during the 2012 season this Tuesday.

The Australian confirmed further surgery was required to get the knee 100% right so he can move forward into the outdoor season without compromise.

Reed finished just off the podium in tonight’s Toronto round of the Monster Energy AMA Supercross, an FIM World Championship and hopes to be back for Round 14 in Minneapolis.

“Well I got a sniff of the podium tonight,” Reed said. “I am excited to be getting the surgery so I can get back to being 100% healthy.

“My knee surgery that I had last year unfortunately has not healed 100%. I got to a level and it never progressed past that.

“I actually thought I could get through supercross and motocross and have it fixed in the off season. Now I am favouring it and I am starting to tweak my back,” he continued.

“I think it is best that I get it fixed as soon as possible and then get back on the bike ASAP as well.

“I am looking forward getting back out there, representing my sponsors and my team and having fun with the fans.” Reed concluded.