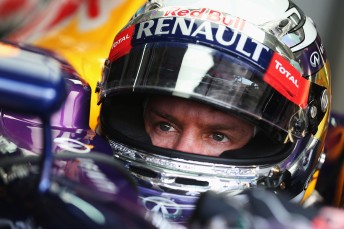 Sebastian Vettel lands pole by almost one second at Sepang

Vettel turned a 1:49.674s lap to usurp Ferrari with Felipe Massa to start alongside the German after upstaging his team-mate Fernando Alonso for the fourth consecutive time.

Incredibly Vettel’s last gasp lap was almost a second ahead of Massa who had snatched second from Alonso after the Brazilian unwound his best lap just before the checkered flag came out.

Lewis Hamilton was fourth ahead of Mark Webber who did the entire session on the same set of intermediate tyres.

This was in contrast to Vettel who came with four minutes remaining and chose to stick another set of intermediates on just as the track seem to be drying out.

However Vettel managed to extract an optimum lap on the fresh set even as the first portion of the circuit had dried out before he went on to claim his 38th pole position.

As Vettel came in for a fresh set so too did Alonso, Adrian Sutil and Australian Grand Prix winner Kimi Raikkonen.

However with the time ticking away Raikkonen was given only one chance of a hot lap but could not lift the Lotus any higher than seventh.

Nico Rosberg was sixth with Jenson Button claiming eighth ahead of Sutil and Sergio Perez.

Lotus were caught short with Romain Grosjean becoming a victim of a shower of rain that brought a halt to Q2 in the final minutes, leaving him in 11th.

Both Red Bull runners left their run in Q1 extremely late, both Vettel and Webber going out on the medium compound tyres before putting in their quick laps to advance in the closing minutes.

Red Bull indeed cut it fine with Vettel scraping through to be 15th after the opening qualifying run.

Like many of the runners Red Bull chose to use the least favoured medium compound Pirelli tyres.