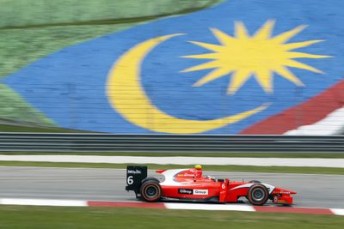 Auckland ace Mitch Evans has inherited a position and will start from fifth position in his GP2 Series debut at the Sepang circuit.

Evans had qualified in sixth place but moves up one spot after Sam Bird was penalised three places after an incident with Evan’s Arden International team-mate Johnny Cecotto jr who retaliated after Bird had blocked him on his hot lap.

As a result of a post qualifying investigation it was judged that between turns 5 and 6 Cecotto jr was impeded by Bird during the Venezuelan’s fastest lap. As a reaction, the Arden driver deliberately forced the British driver off the track.

Stewards have handed Bird with a three-place grid penalty, dropping him to eighth, while Cecotto jr has been excluded from the results of qualifying as his reaction to being impeded by another driver was deemed unacceptable.

Cecotto jr will consequently start from the back of  today’s 31-lap feature Race grid.