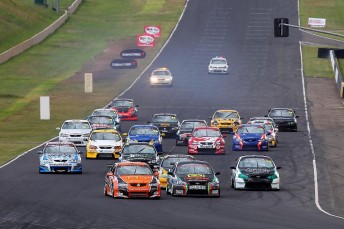 Garioch started from third on the grid for the season-opener but moved to the front of the pack when Davies was handed a drive-through penalty for tipping Pollicina into a spin on the third lap.

Pollicina had earlier rocketed away from his eighth place starting position to take the lead from pole-sitter Davies into the first corner.

Davies finished 15th after his penalty while Pollicina was just one place higher after limping the remaining six laps with front spoiler damage.

Rookie Matt Chada took the flag 14th but was demoted to 19th after a post-race penalty for contact with fellow Ford driver Maurie Pickering.

Two more races tomorrow will complete the opening round action for the Kumho V8s at the Sydney Shannons Nationals event.