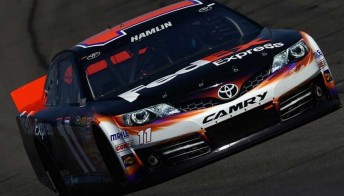 Denny Hamlin will go from pole at Fontana

Denny Hamlin has edged Greg Biffle and Brad Keselowski for the top starting spot for the Auto Club 400 at Fontana in Southern California.

However, the Toyota driver will be the only one set to start up front as both Biffle and Keselowski changed engines in their Fords.

“Honestly, I think our car was really fast,” said Hamlin.

“I knew, talking to a few people in my motor home… it’s cocky to say, but I said, ‘Man, I can almost guarantee a pole, if we have a late draw.’ When they told me we were third, I was like, ‘OK. Well, just never mind. Forget that.’

“I knew, after running so well here in qualifying before, you kind of get a feel for what you need to do as a driver to hit your points and be fast, and I think our car was just exceptional for a lap or so today.”

As time trials ended, Biffle’s team was tearing down his motor to determine the cause of a failure that occurred early in Friday’s opening practice. Keselowski’s team changed engines after the conclusion of practice because of an issue Biffle believed was similar to his. Both power plants come from a common source, Roush Yates Racing Engines.

“I’m a little bit nervous about the engine issues the 16 (Biffle) and the 2 cars had in practice,” said Keselowski.

“Hopefully, those will subside for the race.

“It’s unfortunate, but it’s kind of what it is, and we’ll have a good time, hopefully, racing to the front.”

Australia’s Marcos Ambrose was pleased with his Ford in practice, but that transpire to qualifying where he was 21st.

“I don’t feel too good about that,” said Ambrose.

“We will have to just keep fighting. We have a great team, we have just had a sluggish start to our year so we have to pick it up.”