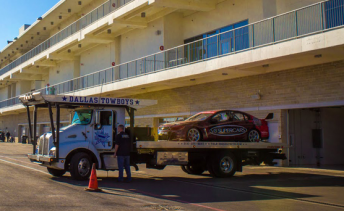 A Chevrolet-badged V8 Supercar in the Circuit of the Americas pitlane. pic: autoguide.com.

Chevrolet will become the V8 Supercars Championship’s unofficial fifth manufacturer when the Australian category takes to the Circuit of Americas in Austin, Texas, this May.

The Austin event marks an opportunity for parent company General Motors to leverage the relationship between the sister Holden and Chevrolet brands, which will soon see Holden’s VF Commodore go on sale in the USA as the Chevrolet SS.

The Chevrolet bow-tie was last seen in V8 Supercars at Bahrain in 2007, when Todd Kelly’s Holden Racing Team entry was re-badged as the kingdom’s then local export version of the Commodore VE, the Chevrolet Lumina.

A similar arrangement also saw the Walkinshaw-run Holden of Rick Kelly compete with Buick branding in Shanghai, China, in 2005.

V8 Supercars has already shipped its Holden Commodore VF-bodied Car of the Future prototype to Austin, where it is being used to promote the race. It is dressed with Chevrolet badgework.

A Holden Motor Sport spokesman told Speedcafe.com that a firm decision on its marketing plans with Chevrolet for Texas is yet to be made and that nothing is currently being ruled out. 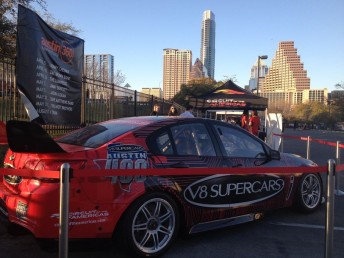 The V8 Supercars-owned prototype car, which is not eligible to race on technical grounds, on display in downtown Austin. pic: statesman.com

A complete re-branding of the company’s flagship Holden Racing Team for the weekend is thought to be among the options under consideration.

Although the early presence of a COTF in Austin could provide the opportunity for a high-profile US-based driver to complete a demo run at the COTA in order to promote the Austin 400, it remains unlikely that a local will compete in the event itself.

Speedcafe.com has it on good authority that only 28 cars will start in Austin, with the prototype car ineligible for competition and no teams having applied for a Wildcard.

It remains to be seen whether anything approaching the 87,000 weekend crowd estimate submitted in a state funding proposal earlier this year can be achieved without a local star.

Last year’s US Formula 1 Grand Prix at the venue attracted 265,000 over its three days, while the recent two-day Grand-Am meeting drew just 27,000.

The May 17-19 weekend is already stacked with North American motorsport action, with the NASCAR All-Star weekend taking place in Charlotte, North Carolina, in addition to qualifying for the following week’s Indianapolis 500 in Indiana

The name, logo, race format and track layout for the Austin 400 were all officially confirmed earlier this week.