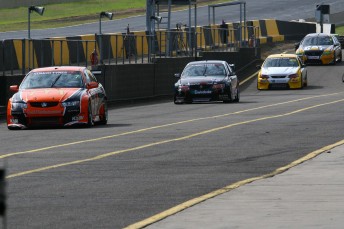 The first Shannons Nationals meeting of the year is underway at Sydney Motorsport Park, with all six opening round categories undertaking untimed practice today.

The Kumho V8 Touring Cars class is the weekend’s standout class, with 22 of the ex-V8 Supercars entered for the season-opener.

Justin Garioch was the quickest of the 14 cars to wear timing transponders during the afternoon, lapping the Sydney venue in 1:37.17s in his Ford Falcon BA.

The 23-year-old is running concurrent racing programs this year as he steps into last season’s Kumho Series winning Falcon of Fernandez Racing in order to gain V8 Supercar miles.

“It is a learning year, but I am also in a position where I want to show what I am capable of and propel my career,” said Davies, who flew under the radar without a timing transponder during practice day.

“My aim is to win the title. If I can do that and show well in Carrera Cup this year hopefully it can open some opportunity in the sport and I can progress my career.

“The team and car have been great so far and the series is really good.. it’s a competitive field. It should be a great year.”

“The cars are totally different and the biggest thing I have had to get used to is the ability to change settings – like roll bars – as you go, which you can’t do in the Porsche,” he added..

“The V8 has a much harder power delivery and less turn – it drives completely differently. Thankfully I think I’ve adapted quite well and I’m very, very happy with the day.”