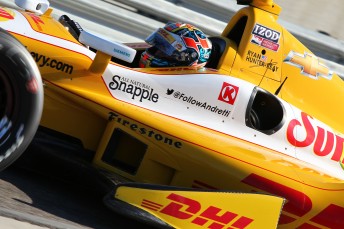 Defending series champion Ryan Hunter-Reay is upbeat about his chances of ending a winless run at his new home race in the IZOD IndyCar Series season opener this weekend.

The Fort Lauderdale based Hunter-Reay has finished on the lower steps of the podium at the St Petersburg street race but a win has proved elusive.

Chevrolet-powered Andretti Autosport guided Hunter-Reay to the Championship which was won in dramatic circumstances when Australian Will Power crashed at the superspeedway at Fontana, California in the last round of the series.

“The engineers and crew at Andretti Autosport have been working so hard to stay one step ahead of the rest in terms of development over the off-season,” Hunter-Reay said.

“And I know we’re all ready to get on with the job and put that hard work to the test.

“I’ve stood on each step of the St Pete podium except for the top spot and I feel we can make that next step.”

Hunter-Reay, like many of the drivers, has applauded IndyCar’s move to abandon the delay activation system on the push-to-pass feature for this season.

Meanswhile Honda’s pivot team, Chip Ganassi racing which field drivers Dario Franchitti and Scott Dixon, will lead the Japanese aligned teams with a new Indy V6 engine. Coded the HI13RT, it is an evolution of the turbocharged, direct injection unit that was unveiled 12 months ago.

“We’ve been encouraged by the performance of the new Honda Indy V6 and the improvements we’ve made during the off-season,” Roger Griffiths, Honda Performance Development Technical Director, said.