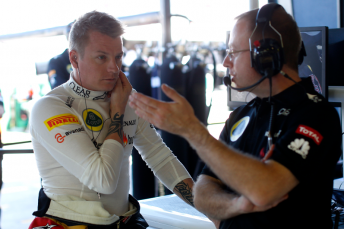 Kimi Raikkonen (left) set the pace before the rain came

A 1:36.57s effort on the prime tyres from the Lotus driver just shy of the 90 minute session’s halfway mark was followed shortly afterwards by a shower on rain.

With more weather expected to hit across the weekend, teams used the opportunity to undertake running on first the full wet and then the intermediate tyres.

The track improved sufficiently for slicks in the closing stages but not enough for Raikkonen’s time to be under threat.

Sebastian Vettel and Felipe Massa’s early laps were therefore good enough to hold on for second and third respectively, with the duo less than a 0.1s adrift of Raikkonen.

Webber had earlier set the pace in Practice 1, with his 1:39.94s lap only bested by the top three in the second hit-out.

Despite the interference of rain, each of the top 10 runners from the opening session all finished Practice 2 in the top 10.

The struggling McLarens were just outside the 10 on both occasions as the team continues to struggle with its latest car.

Force India has, temporarily at least, taking over McLaren’s mantle as one of the top-five teams, with the squad following up its double points finish in Australia with another strong showing today.

A final 60 minute practice session will take place tomorrow ahead of qualifying.