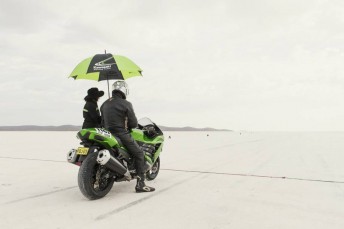 Ralph Nicholls about to set a new land speed record on the barren Lake Gairdner, SA

A Kawasaki Ninja ZX-14R has recorded a new Australian motorcycle land speed record on Lake Gairdner in South Australia, charging down the salt flat at a speed of 334.99kph (208.153 mph).

“It was hard work in extremely hot and hostile conditions,” explained Nicholls. “Over the week we progressively refined our approach to this unique form of racing and on the final day of racing on what was to be the Ninja’s final run of the meeting we set the record.

“It was an amazing feeling to travel at that speed. I was literally skipping along the salt. It was certainly a life experience I’ll never forget.”

The new mark was set during the DLRA Speed Week. The only adjustment made to the bike from the road going version of the Kawasaki Ninja was the removal of the speed limiter and some adjustments to timing and gearing.

The chassis was the first of that model to roll off the production line at Kawasaki in Japan (#0001).

Even more remarkable was that it was the first attempt by the Kawasaki Australia supported team consisting of Team Manager Leanne Knowles, Crew Chief Anthony Mack and assistant Peter Mack, along with Nicholls.

A camera crew captured the action in 3D for an upcoming documentary on the effort.