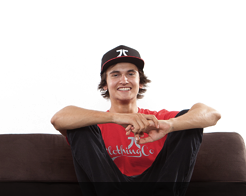 Tyrone Gilks, a freestyle motorcycle daredevil, has died after suffering massive injuries during a training jump in preparation for a world record attempt.

The 19-year-old Gilks was performing a jump ahead of his attempt on the world’s longest ramp-to-ramp dirt jump on a 250cc bike.

He landed heavily and was thrown over the handlebars where he was treated by paramedics before being flown from the Maitland showground to Newcastle’s John Hunter hospital.

The teenager had recently moved to the Gold Coast where he worked in a bike shop at Palm Beach.

Fans of the freestyle world champion began posting tributes on his Facebook page.

Gilks was to have attempted the record at the Maitland Showground this weekend as part of a bike and hot rod show.