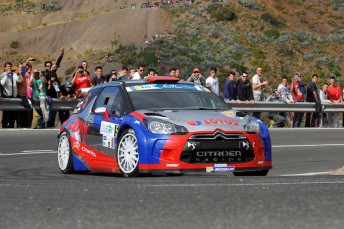 Robert Kubica was fastest on shakedown on Grand Caneria

Robert Kubica has made an instant impact on his FIA European Rally Championship debut by going fastest in shakedown for Rally Islas Canarias El Corte Inglés.

Driving a Citroën DS3 RRC, Kubica set a fastest time of 1m25.6s over the 2.5-kilometre stage between the towns of Marzagán and El Sabinal. The Pole was 0.6s quicker than ŠKODA Motorsport driver Jan Kopecký and local hero Luis Monzón (MINI John Cooper Works RRC), who are both double winners of the event and among the contenders for victory when the rally gets underway with the first of 14 stages tomorrow morning.

“Shakedown doesn’t matter but it was important to get some time in the car and have some more information following our short test here on Monday,” said Kubica.

“We need to work quite a lot still but generally everything has been good for us so far.”

Kubica has not driven an F1 car since 2010, after serious injuries, which included his forearm being partially severed, in a crash at the Ronde di Andora Rally in February 2011. The Pole has been allowed to drive with a paddle shift gearbox, due to the hand and arm injuries. The paddle shift, placed on the left of the steering wheel, has been specifically designed to have a slower shift to match the gearchange speed of a conventional Regional Rally Car gearbox.

Asked whether he felt more confident following shakedown, which enabled his Citroën engineers to finalise the set-up of his car, Kubica said: “I would lie if I say yes. We are losing downforce so we have to keep working with the set-up so I am confident with the car and really show what the car will do. They are fast stages with some very narrow parts and there is no margin for a mistake.

Craig Breen was the fastest Peugeot driver in fourth, one place ahead of team-mate Jérémi Ancian. Daniel Oliveira completed the top six in his Ford Fiesta RRC.