Engineer: Pedrosa at peak ahead of MotoGP start

Engineer: Pedrosa at peak ahead of MotoGP start 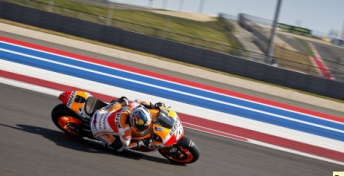 Dani Pedrosa testing at the Circuit Of The Americas track recently

Dani Pedrosa’s race engineer Mike Leitner says the Honda rider will start the 2013 MotoGP Championship in the best form of his career.

Leitner, who enjoys a long association with Pedrosa, was speaking after the latest round of MotoGP pre-season testing at the Austin circuit in Texas which will host the second round of the Championship on April 21, two weeks after the opening round at Qatar.

“His (Pedrosa’s) performance in the second half of last season suggests he is really at his best,” Leitner said.

“When you win, say, six of the last eight races, you are at the maximum level. However there is always some room for improvement. You will not take giant steps forward anymore but you can always improve something.”

The Repsol Honda Team rider tried different set-up changes to combat the extra weight after the rule changes for the 2013 season in his recent test at the Circuit Of The Americas track in Austin.

“In Sepang (Malaysia) we had some good tests and also in Austin,” Leitner said.

“In America we tried to make adequate changes for the track, without going crazy about it.

“All of the bikes will have this extra weight and you definitely notice it. It is a challenge when it comes to looking at a new set-up.

“However I think that we are on a good path in terms of adapting to these extra kilos required by the rules.”

Leitner has been with Pedrosa since 2004 when the rider was in the 250cc class with the relationship crucial to the team’s functionality.

“Over the years you learn to know what the rider wants but you always need to listen and understand the feelings of the rider.

“The understanding with him and the team is very good.”