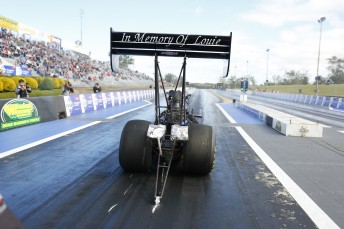 After starting the season for Rapisarda Autosport International in the US, the three times NHRA Top Fuel Champion will have his first hit out on Australian soil on Good Friday.

“Racing in Australia will be a little different, it is still Top Fuel, but different – being a quarter mile (400m) racetrack and the three round format that we’ll be doing,” said Dixon – referencing the 1000ft (300m) distance used in the NHRA. “Lee (Beard – Crew Chief) and I will be in Australia very much to quickly set the car up before heading to Queensland for the event, so there isn’t much time.”

He admitted the Super 3 Extreme format is used regularly in America, however it is more used in an exhibition scenario -rather than as a full points paying Championship event as it will be at Queensland’s premier drag racing facility.

“The three-round format has been used here in the United States for exhibition racing, so it will be interesting to see it in action for a championship event,” said Dixon.

Two rounds towards the ANDRA Top Fuel and Top Alcohol Championships will be held – one on Good Friday and one on Easter Saturday – with the premier classes beginning their runs from 5pm on both days. The pointscores will be accumulated from both days to award the overall winner – in Top Fuel it will be for the Louie Rapisarda Trophy – a perpetual trophy to honour Louie Rapisarda, who lost his life in an accident at Willowbank.

Dixon’s approach to the weekend is fairly simple – to win:

“When it comes down to it, whether you are racing in the United States or Australia, or on the 1000ft distance (used in the NHRA) or the quarter-mile, the ultimate strategy is always the same – the first car to the finish line wins!”

Dixon has been able to bring his family to Australia with his children being on Spring Break in the States.

“We’ll be able to spend time together in Australia as a family, which will be really cool.”

The focus won’t just be around Dixon next weekend, with the Top Alcohol competitors realising the pressure they are under with the unique Super 3 Extreme format. Driver of the JBS Tools Funny Car, Wayne Newby believes that fans are in for a hell of a show over the Easter weekend.

“Each day, you have two passes to make it count and secure your place in either the Final or the Preliminary Final – there is no space for taking it easy or for mistakes,” explained Newby. “You will be forced to drive your car to its potential every time you venture out onto the Willowbank quarter-mile.

“That guarantees white-knuckle action for the spectators and points the focus well and truly onto going fast, being fast and getting to the finish line first is the only way you are going to win this event, all other strategic patterns go out the window with this format.”