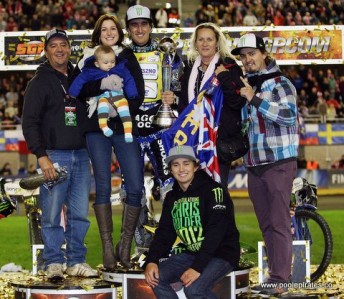 Like any sportsman, having strong support of your family is crucial to success, but in the case of World Speedway Champion, Chris Holder it goes to another level.

The population of the South-Western Sydney town of Appin will be severely dwindled this weekend as the extended Holder clan make the trip to Auckland to see their boy begin his World Title defence.

His father, Mick used to ride Speedway, so too uncles Ben and Matt. Chris’ older brother James is a well respected rider in the British Premier Leagues, however has been injury prone over recent seasons, whilst youngest brother Jack is considered to be one of the brightest hopes to keep Australia at the top of the world speedway pile in the years to come.

The proudest moment for Mick and Chris’ mother Karen came last year at Torun Stadium in Poland when they saw their son become the youngest World Champion ever. The entire family was in the eastern European nation for the event in what was a memorable week for them.

They flew into England the week of the race, met grandson, Max for the first time and then went on to see Chris win the Title.

Their tickets at Torun fell such they were literally adjacent the starting tapes and looked into the riders’ eyes as they waited for the tapes to fly.

“Every time Chris came out, we had to duck, as he would have been able to see us,” Mick recounted to Speedcafe when back in Australia over the summer. “I’ll never forget the race where he won the Championship, Karen and I were the most nervous people in the place and were bent down on the ground until the race started.

“When Chris came across the line and we knew he’d won the World Championship Karen and I just collapsed into each others arms, it was a bit of a blur after that.

“To see Chris for the first time after the race was a special moment for all of us as a family. We were there together, it was incredibly emotional.

“It didn’t sink in what had happened until the next night when Chris and I were sitting together at his place in the UK watching a replay of the event – we both just looked at each other and realised the achievement.”

Saturday’s event will represent just Holder’s 35th Speedway Grand Prix and he enters his fourth consecutive season at the pinnacle of the sport. Scoring four points in NZ last season, no World Champion has ever been crowned from such a low points base at the first event.

Although he could quite easily say that the four points was off the back of the emotion of his partner, Sealy giving birth to Max halfway around the world on the morning of the NZ Grand Prix (which he listened to via mobile phone from Auckland), this week he admitted the genesis of the low pointscore was from trying to show off to family and friends. Holder vowed that he will enter the Grand Prix arena on Saturday to have fun and in a much more relaxed state of mind.

“I was trying to do it for my friends and family last time, but maybe I was trying a bit too much,” the World Champion reflected. “This time I will just go out there and race my bike. Hopefully it all works out for me.

“It would be good to start off this season really well. I’ve done a fair bit of practice and work getting everything ready. It would be really cool if I could get the win (in Auckland).”

Without doubt, the most vocal support in the Western Springs stands on Saturday will be from the thousands of Australians that have made their way to Auckland and in the centre of them leading the charge will be the Holder family.