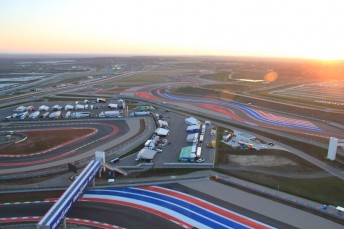 V8 Supercars has officially confirmed the circuit layout and race format it will use for its inaugural visit to the Circuit of the Americas in Austin, Texas, this May.

As reported by Speedcafe.com last September, the venue’s 3.7km National Circuit, which cuts out five corners from the full 5.5km Grand Prix layout, will be utilised for the Australian series.

The May 17-19 event will be known as the Austin 400 and feature a pair of 100km races on both the Saturday and the Sunday.

The format mimics that of the category’s other international fixture at Pukekohe, New Zealand, which will take place next month.

The circuit confirmed in recent days that the V8 Supercars will be supported at the event by the Pirelli World Challenge.

While hopes of United States-based driver involvement in the V8 Supercars portion of the meeting appear to have faded, Australian NASCAR driver Marcos Ambrose says he’ll be watching how the cars and drivers handle the course with interest.

“The drivers may find the track a bit slick; at the Formula 1 event it took a long time to rubber up but that makes it even more fun to watch, especially as the V8 Supercars slide around quite a bit,” said Ambrose recently in an event publicity statement.

“These guys love to rub panels so that’s going to be spectacular. The V8s are running the short circuit and that is somewhat unknown … but I think it might be the better choice. It is going to be very technical and full of passing opportunities.

“The first corner will be interesting. I was so, so afraid of a crisis situation at the start of the Formula 1 race but I guess they took care of each other and got through it. The problem is that you almost do a 180 (degree turn) and, with the wide entry, you can go in there four abreast, but four abreast cannot come out.”

The Circuit of the Americas was completed late last year ahead of its debut on the Formula 1 World Championship calendar.

The venue is currently being used for MotoGP pre-season testing ahead of the motorcycle class’s inaugural race in Austin on April 21.