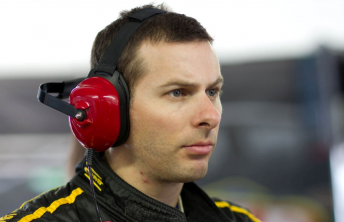 Steve Owen will make his Carrera Cup Australia debut in the category’s two-driver Rennsport event ahead of his return to V8 Supercars competition at the Sandown, Bathurst and Gold Coast endurance races.

The 38-year-old will drive alongside Porsche regular James Koundouris in the Sydney Motorsport Park meeting that will see Pro-Am line-ups tackle a pair of 60 minute races.

The Porsche hit-out will mark Owen’s first race meeting of the year after he found himself without a full-time V8 Supercars drive following the off-season downsizing of Dick Johnson Racing.

One of the king-pins of the V8 Supercars endurance co-driver silly season, Owen is now being strongly linked to a seat at Ford Performance Racing after a previously rumoured drive with Supercheap Auto Racing failed to materialise.

Owen told Speedcafe.com that he hopes to have a V8 Supercars co-drive confirmed within the coming weeks, and that he is looking forward to racing at the Rennsport meeting in May.

“More time in a race car is always good and having done the Bathurst 12 Hour a couple of times with James in addition to helping him out this year in the Carrera Cup (as a coach), driving alongside him for the Rennsport event is a natural progression,” he said.

“James is one of the top Elite drivers, who funnily enough are in more demand than the Pro guys. The Pros will all be within a couple of tenths of each other but good Elite guys are hard to find and James is right up there with the best of them.”

James’ brother Theo Koundouris will also be in the Sydney field having signed to co-drive with Pro runner Steven Richards.

FPR, meanwhile, already has Richards, Dean Canto and Chaz Mostert locked into its line-up for the V8 Supercars enduros.

Mika Salo had hoped to join the team, but told Speedcafe.com at Albert Park that he is remains committed to Finnish Formula 1 television duties that clash with both Bathurst and the Gold Coast.

FPR team principal Tim Edwards, who missed Albert Park while on a visit to Prodrive headquarters in the United Kingdom alongside team owner Rod Nash, told Speedcafe.com that his squad’s full endurance driver roster will be confirmed in the coming weeks.