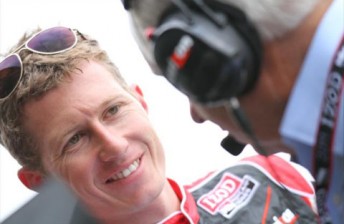 Fresh from his win in the LMP2 class at the Sebring 12 Hour, Ryan Briscoe is almost certain to gain a berth in the Le Mans 24 Hour race in late June.

There were strong indications that Scott Tucker the owner of the HPD ARX-03b which Briscoe shared with Marino Franchitti at Sebring. will use the same line up in the prestigious La Sarthe endurance race.

Briscoe, despite being a member of the successful factory Porsche squad several years ago in the American Le Mans Series for Penske has never been in a position to receive an opportunity to race at the twice-around-the-clock French race.

His pending entry into the event comes soon after fellow Australian Jason Bright confirmed plans to make his maiden appearance at Le Mans and run a Ferrari 458 in the GTE Am class. CLICK HERE to read previous story.

Briscoe was released from Penske’s IndyCar line up in the off-season and now looks set to furnish a high profile career in top level international sports car racing.

Although the Sydney-born racer remains in the frame for a one-off raid on the Indianapolis 500 on the last weekend in May as well as the co-driver V8 Supercar races in Australia later in the year.