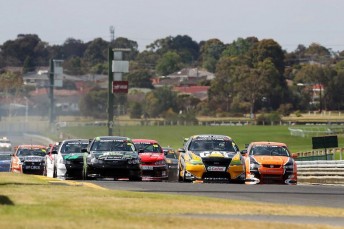 Evangelou and Haber lead the field at Sandown last year

A record field of 22 cars is set to tackle the opening round of the 2013 Kumho Tyres V8 Touring Car Series when the Shannons Nationals kicks off at Sydney Motorsport Park this weekend.

Last year’s series winner, Josh Hunter, will not compete this season having moved on to the Dunlop Series.

The Kumho category will run with two distinct classes for the first time, separated into those running the newly eligible sequential gearboxes and those with the traditional H-pattern.

Twelve PRB Clubmans and 25 Superkarts will complete the weekend action.