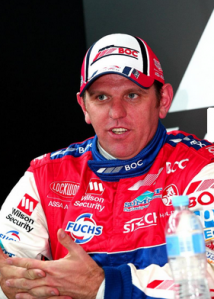 Jason Bright will finally get the chance to compete in the world’s premier endurance race, the Le Mans 24 Hours, in June.

Bright will drive a Ferrari 458 for 8Star Motorsports in the GTE Am class alongside team owner Enzo Potolicchio and a yet-to-be-confirmed third driver.

SPEEDCAFE: Is racing in the Le Mans 24 Hours the realisation of a dream for you?

JASON BRIGHT: Yeah it is. For me, the biggest races in the world are the Monaco Grand Prix, Le Mans 24 Hours, Indy 500 and Daytona 500. To get over there and be able to do Le Mans is definitely very special and will be one of the highlights of my career.

SPEEDCAFE: You got quite close several years back with Aston Martin Racing (2006), but obviously it’s not easy to find enough gaps in your V8 Supercars schedule to do it properly.

BRIGHT: Most years since 2006 it’s either clashed or I was too busy during the Britek days to be able to pull something together.

When it was confirmed that it wasn’t clashing this year I was pretty keen to make it happen, so I put some feelers out early in the year and ended up with a couple of different options on the table.

I think this one definitely works the best. The car will be run under 8Star Motorsports, but they’ve got a very close relationship with AF Corse.

We’ll have all the right equipment and Enzo (Potolicchio) is an experienced campaigner. I’m confident that we should be able to be competitive.

SPEEDCAFE: You raced with Stéphane Sarrazin, who has a relationship with 8Star, on the Gold Coast for the last couple of years. Did he play a big part in setting this up?

BRIGHT: Several people did. I spoke to a few people that I’ve raced with over in Europe and they all ended up pointing me in one direction. Between Stéphane Sarrazin, Pedro Lamy (who was an Aston Martin Racing driver in 2006) and Dave Ward (former team manager at Ford Performance Racing)… he got Allan McNish to do some calling for me as well.

By the time I spoke to 8Star they sort of had their mind made up that they were going to have me anyway! It worked out really well. 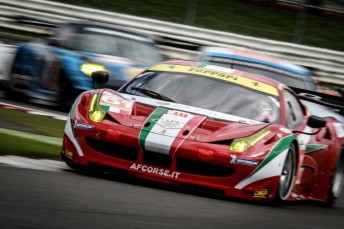 SPEEDCAFE: Were you only looking at GTs? It had been suggested that you were looking at LMP2?

BRIGHT: I was looking at an LMP2 drive as well that was available. It was a good option. It required some funding but I felt like I could come up with that if necessary.

But doing it in LMP2, you’d have to do a lot more testing and put a lot more focus on areas like strengthening neck muscles for the race. I think GT is probably the better option for me this time, especially for my first time there. It’ll be a much easier car to adapt to.

SPEEDCAFE: Obviously you have to do the official Le Mans test day two weeks before the event to be able to start, but are you confident that you’ll get enough miles in before the race?

BRIGHT: I’m confident that side of it will be ok. I’m going to France next week to test the car as part of a four-day World Endurance Championship test at Paul Ricard, and we’ll do more pending confirmation on how the dates line-up.

You get reasonable amount of running at the Le Mans test as well so I don’t think I’ll have too much trouble adapting to the car.

SPEEDCAFE: Adapting to the flow of the traffic will surely be the biggest challenge.

BRIGHT: Yeah, that’s one of the things that V8 Supercars doesn’t give you is having cars coming up at you so quickly.

When I drove at Sebring that was a big adjustment. You looking in the mirror and a LMP car is 100 metres behind but then you turn into the corner and they’re underneath you. That’s a big part of it, and keeping out of trouble over 24 hours is a sizeable challenge.

Fortunately I drove the Peugeot at Bathurst (in the recent Bathurst 12 Hour), which gave me good experience of looking backwards while driving forwards!

SPEEDCAFE: Is racing at Le Mans a box you’ll tick and be content with? Or is it something you can see yourself doing into the future?

BRIGHT: I definitely want to do more of it. I enjoy endurance racing and the beauty of it is that once you’ve done Le Mans you don’t have to do the official test the next time. That’s always been the hard part about our calendar. It usually clashes with one of them.

SPEEDCAFE: So with a fast V8 Supercar in the shed, a young child, a recent engagement (to long-time partner Lucy) and now a Le Mans drive, has life ever been better for Jason Bright than it is right now?

BRIGHT: Well, 2013 isn’t proving unlucky for me, that’s for sure! I feel like this year is going very well. V8 Supercar wise we’re very strong. Getting engaged and having my 40th birthday were great, so it’s all going extremely well. Having the opportunity to compete at Le Mans really adds to all of that.

It’ll be special to go over there (Le Mans) and do it as well because it’s something that JR (the late Jason Richards, who was team-mate to Bright at BJR in his final V8 Supercar season in 2010) and I talked about doing together.

After he drove that Porsche 962 (the 1987 Le Mans winner) at Eastern Creek when he was sick (in mid-2011), he was like ‘man, these guys want us to go over and drive some more cars over there, are you coming with me?

I’m sure if he was around we would have been working on plans together for both of us to go over and have a crack at this.