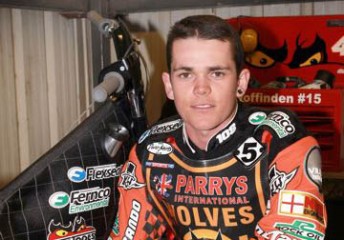 The ‘third Australian’ in this weekend’s Buckley Systems New Zealand Speedway Grand Prix, Tai Woffinden is awaiting his return to the World Championship with baited breath.

Woffinden grew up in Perth, Western Australia and has the Australian flag tattooed on his back, however races under a British license in deference to his British parents.

The 22-year-old along with Darcy Ward was one of three wildcard entries for the entire 2013 season.

It isn’t Woffinden’s debut in the World Championship, having last completed a full campaign in 2010.

For the full story on Tai Woffinden’s return to SGP and more in the lead up to this weekend’s Buckley Systems New Zealand Speedway Grand Prix CLICK HERE to visit Speedcafe.co.nz.