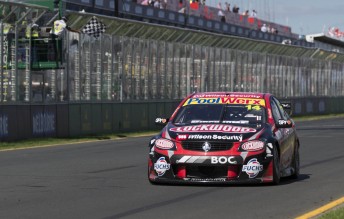 Fabian Coulthard in rare form for BJR at Albert Park

The Brad Jones Racing team had a banzai weekend at Albert Park.

Fabian Coulthard won three of the four races, although his third was not delivered on the track but as a result of the mass exclusion of eight cars.

Even so Coulthard did finish that race in fourth position behind three Triple Eight-built Commodore’s that were part of eight cars banished from the results in a post-race sequel.

Team-mate Jason Bright completed a one-two for the Albury-based BJR outfit in a clear sign that it’s early season pace was no flash-in-the-pan.

Whether or not this team, which runs the same front-end components as the all-conquering Triple Eight operation, has got what it takes to continue this epic speed to season end is the key question?

Certainly, on past records BJR has always performed strongly at the Australian GP meeting that does not carry Championship status yet the formguide has been so convincing, that the team has started to raise the possibility that anything is possible in the new generation of V8 Supercars.

The great test will come at the next round at Symmons Plains from April 5-7 where it is paramount BJR must validate the speed it has shown this year.

Since showing up as the surprise front-runners at the Sydney Motorsport Park official pre-season test in February, BJR has shown no hint of sitting back on its laurels.

Even with Red Bull performing excellently at Clipsal and winning the weekend overall, there is no absolute confirmation that the status quo remains in play in V8 land.

Have your say on the Pirek Poll below?