McLaren not ruling out abandoning 2013 car

McLaren not ruling out abandoning 2013 car 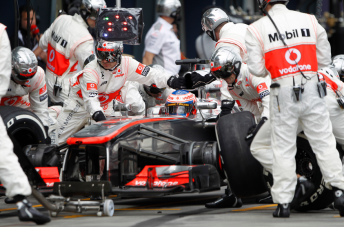 Vodafone McLaren Mercedes team principal Martin Whitmarsh admits that his squad may have to revert back to last year’s car if it cannot come to terms with its 2013 challenger.

The proud British outfit’s struggles were arguably the story of the weekend in Melbourne, with the expected ‘big five’ teams reduced to the ‘big four’ as drivers Jenson Button and Sergio Perez floundered in the midfield.

Button put in a gallant effort to salvage two points from his Sunday afternoon with a ninth place finish while Perez came home 11th. The pair had qualified 10th and 15th respectively.

Neither had looked comfortable with their MP4-28s all weekend; the cars particularly skittish over the circuit’s bumps.

“We’ll see,” said Whitmarsh when asked about the possibility of revisiting the MP4-27, which set the pace for much of the 2012 season without ultimately winning either title.

“We are not too proud to say when we’ve got things wrong. We do occasionally (get things wrong) and that’s just a fact.

“But I think for the time being we’ve got to try and get some understanding and make sure we do the best job we can to go forward with this car as quickly as we can.

“We think we can work this one out, but if we don’t, we’ll look at anything.”

Abandoning a new car wouldn’t come without precedent for McLaren, which never raced its planned 2004 contender, the Adrian Newey-designed MP4-18.

Button, who won the Australian Grand Prix with BrawnGP in 2009 and then with McLaren in 2010 and 2012, warned after Sunday’s race that returning to a competitive position is likely to be a long process.

“There is a lot of work for us to do, it’s not something we are going to change overnight,” he said.

“I think we extracted everything we could today, but we are not going to suddenly be competitive.”

The 2013 Formula 1 season continues this weekend with the Malaysian Grand Prix at Sepang.