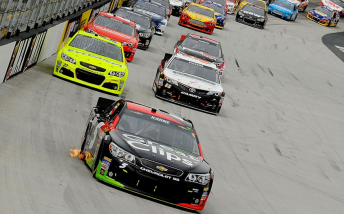 Kasey Kahne on his way to winning at Bristol

Kasey Kahne took his second short track career win as the Sprint Cup points table was shaken up after the Food City 500 at Bristol.

Penske driver Keselowski has shot into the lead of the Sprint Cup standings after Jimmie Johnson, who held a slender lead going into the Bristol race, struck the wall bringing out the 10th caution period of the race on lap 454.

Richard Petty driver Marcos Ambrose was shuffled down the order, running near the tail at one stage, but remained solid to claim 19th position. Ambrose managed to boost himself  to 15th in the overall standings.

Keselowski had the lead on the restart but had a messy getaway with Kahne springing into the lead.

The Las Vegas winner Matt Kenseth was knocked out of the running when Jeff Gordon sliced a tyre on lap 389.

Kahne was prominently placed throughout the 500 lap race before going on to score his 15th career victory. 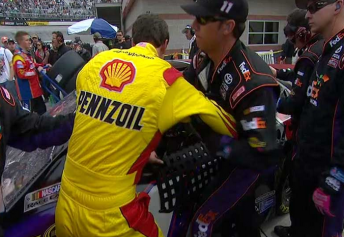 Three Hendricks Motorsports drivers were running in the top five 130 laps into the race with Kahne, Gordon and Johnson running third-to-fifth as they hunted the leader Denny Hamlin.

Then by lap 147 Kahne managed to catch Denny Hamlin before spearing into the lead.

Runner-up Busch, who started from pole, staged a stirring comeback after receiving a penalty.

Over the remaining 20 laps Busch and Keselowski were engaged in an enthralling battle for second before the former prevailed.

Hamlin’s promising run came to nothing when he connected with the wall late in the race ending with steering damage leaving him circulating with a wounded car and ending up in 23rd place.

Hamlin and Joey Logano, former team-mates at Joe Gibbs Racing, were the involved in a post-race scuffle after Hamlin nudged Logano on the final restart. A Hamlin crew member intervened to diffuse the situation by pulling Logano away.

See video below of Hamlin/Logano altercation