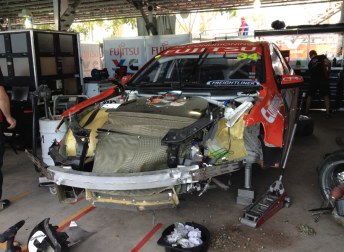 A day after taking victory in the final race of the weekend at Albert Park with Scott McLaughlin, Fujitsu Racing GRM has turned its attention to repairing its sister car that was crashed heavily by Alex Premat on Friday.

Premat was sidelined for the weekend after a pit-exit pass on Lee Holdsworth early in the opening race saw the left-front corner of the Holden make contact with the right-rear of the Mercedes. The contact broke Premat’s steering, sending the Frenchman hard into the left-side concrete wall.

Sporting heavy damage to its left-front corner, the #34 Holden was returned to the team’s Dandenong, Melbourne, workshop before detailed assessments began on Sunday morning.

The car needs to be back on track in time for the second championship event of the season at Symmons Plains on April 5-7.

“We had the boys measure it up on Sunday and it doesn’t look too bad,” team manager Dean Cowling told Speedcafe.com of chassis VF15, the second of the two built by GRM under the Car of the Future regulations.

“There was a fairly heavy damage to the left-front-corner and a bit on the chassis, but we’ll get stuck into that today and see how we go.

“It was a shame that we couldn’t get it back running for the weekend but it’ll be fine for Tassie.

“We’ don’t have a spare at all at the moment so we need to make that chassis work.” 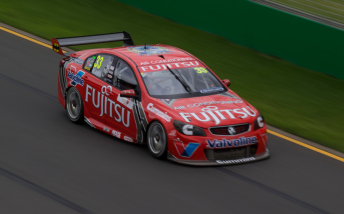 Cowling, who was promoted to the team manager role pre-season following the departure of Pierluigi Orsi, says McLaughlin’s Albert Park win has raised the squad’s expectations for what it can achieve this season.

“Scotty drove really well and the pitstop boys were on it too, it was just a good team effort,” he said.

“The boys have just been working flat-out for the last four or five months so to get a result like that was a really, really good reward.

“It definitely raises our bar in terms of expectations for the year.

“We’ve got a good package at the moment, but we’ve got to make sure we keep moving forward and keep developing.”

McLaughlin and Premat will head to Symmons Plains sixth and 13th in the V8 Supercars Championship respectively after a positive run in Adelaide that was blighted only by a power steering failure for the Frenchman on the Sunday.