Brad Jones Racing believes it must make the most of its early season speed at the next points-paying event in Tasmania if it is to mount a serious attack on the 2013 V8 Supercars Championship title.

Coulthard led the team to one-two results in qualifying and the overall standings, winning three of the four races along the way.

The performance came just over a month after the team sprung a surprise by locking out the top of the time sheets at the official pre-season test at Sydney Motorsport Park.

While Coulthard’s car was also among the fastest in the only championship event held to date this year in Adelaide, a mixture of unreliability and on-track incidents left Coulthard and Bright 22nd and 27th in the points standings respectively.

Emphasising the need to start clawing back the margin to the front-runners at Symmons Plains in three weeks time, team owner Brad Jones told Speedcafe.com the speed shown at the weekend was a testament to his team’s hard work.

BJR was one of the last accredited manufacturer teams to begin track testing its 2013-specification cars, which feature front-end components from renowned category benchmark Triple Eight. 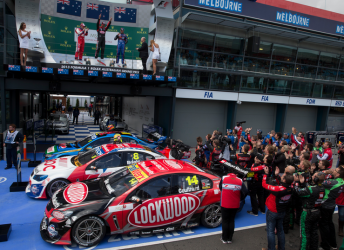 “I can honestly say that I didn’t think these sorts of results were going to be possible, but it’s been a very pleasant surprise,” Jones said after Albert Park, where his team doubled the amount of race wins it had accrued in V8 Supercars since joining the category in 2000.

“I thought we’d be there or thereabouts, but for a team to finish one-two is few and far between. Even for Triple Eight and FPR it doesn’t happen that often.

“We’ve come out of the box with everything pretty close to right, but I’m sure other teams will get to where we are. For us now it’s about getting the results while we can and hopefully keeping it going over the season.

“At the moment we’re a long way from being title contenders,” he added, referencing his driver’s championship positions.

“I always knew I had the ability to do it, but to beat all of these guys on the same day is just awesome for your confidence,” he said.

“At the end of the day it was non-championship, but it’s still race wins and we’re still racing against the same people.

“We’re comfortable that we’ve got good car speed but we’ve still got to learn more about these cars. Everyone else is going to catch up and find more speed from their cars. We’ve hit the ground running and we’ve got to capitalise on it while we can.”

Bright’s qualifying performances of 18th and 20th for the two Adelaide races have been the team’s only real sign of struggle in the early part of the year.

Strong race pace from the BOC Holden in the two 250km encounters however ensures that the former Bathurst winner is also optimistic that the Albury-based squad can be more of a consistent force than it has been in recent years.

“I think we’re looking alright,” he said after Albert Park.

“Fabian and I are running  a pretty similar set-up at the moment and our engines are strong.

“Adelaide probably proved we’re still struggling a little bit on the bumps, but the car speed has been really strong every other time we’ve been out.

“We’re winning the “non-championship championship” at the moment, but it all bodes well for the rest of the year.”

The Tasmania 360 at Symmons Plains will take place over the April 5-7 weekend.