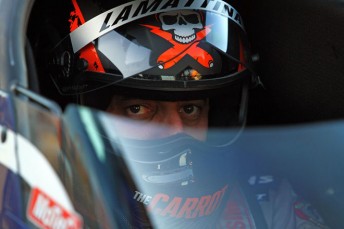 The addition of three times NHRA Top Fuel World Champion, Larry Dixon to the Santos Cranes Super 3 Extreme Easter extravaganza at Willowbank Raceway has piqued the interest of Australia’s Top Fuel elite, however the red carpet will not be rolled out for the American, with everyone aiming to claim his scalp.

Current ANDRA Drag Racing points leader, Phil Lamattina is one driver not worried by the addition of Rapisarda Autosport International’s NHRA pilot to the Australian scene.

“It’ll be great to have Larry Dixon in the field, but for us he’s just another name we have to beat and that’s exactly what we will be trying to do,” said Lamattina.

“The competition is a great opportunity for the Australian teams to step up to the plate and race against the very best there is.”

Local driver, Steve Read is another that hopes he can pull out one of his typical home turf special performances and upstage the American superstar.

“Dixon and (Crew Chief, Lee) Beard are in my opinion up there with the best in the world for driving and tuning respectively, so it is definitely going to be interesting to pit ourselves up against them during this event,” said Read.

“They will have an advantage in terms of the length of their experience and the amount of events they do, but we will have the home track advantage as well as familiarity with the tricky Australian weather conditions, so it will make for some great matches I think.”

Top Fuel will be racing for the Louie Rapisarda Trophy, in memory of Louie Rapisarda, the son of Australian drag racing stalwart Santo Rapisarda. It will deploy the three racing round format that was trialled successfully in Perth earlier this year.

Following qualification and the heat races, a Preliminary final determines the third rung on the podium – contested between the third and fourth quickest winners, with the winner determined from the two fastest heat race winners.

The field is reset for the Saturday affair and the racing event repeated.

An overall winner is determined from the combination of both days’ scores (see below infographic for a full explanation of the racing format).

The other ANDRA feature category at Willowbank on Good Friday and Easter Saturday (March 29-30) is Top Alcohol.

Current points leader Phillips has been keeping an eye on weather conditions and predicts that national record times could be laid down on the Ipswich quarter-mile.

“When you combine the pedigree of the racers signed up for this event with the expected weather conditions and track preparation this should be a really fast event, with my national records of 5.524 seconds and 420.15kph (261.07 mph) likely to get whacked – hopefully by me!”

The feature category action will begin from 5pm on each day at Willowbank Raceway. 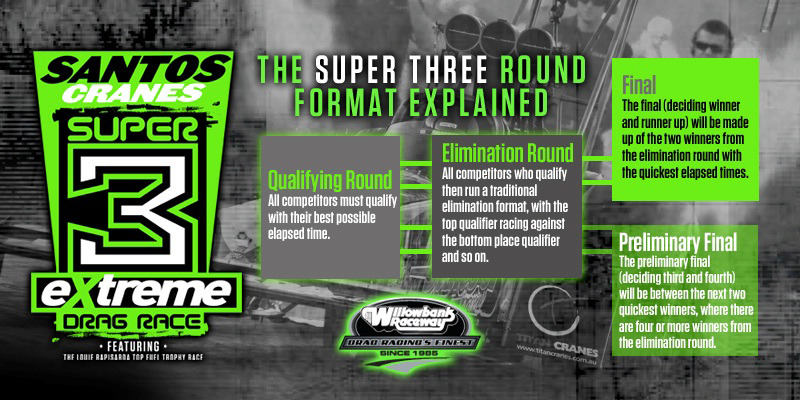