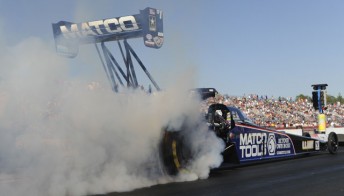 Antron Brown has rocketed to the top of the Mello Yello NHRA Top Fuel Championship with victory in Gainesville, edging out Clay Millican.

He holds a four point advantage over Tony Schumacher, who was a surprise first round casualty, losing to Khalid AlBalooshi. Brown edged out Rapisarda Autosport International pilot, Larry Dixon in the first round, Dixon taking the Australian machine to 15th quickest in qualifying.

After taking care of Dixon, Brown then knocked out Steve Torrence and Spencer Massey on his way to meeting Millican in the finals. Millican eliminated Brittany Force, AlBalooshi and Doug Kalitta.

Brown crossed the line 0.05s in front of Millican to take his first win of 2013 and his 38th career final round victory.

“It’s a great team effort. It felt good to bring that win home, and hopefully, we can put Pomona behind us and keep moving forward,” said Brown, referencing the high speed crash he suffered at the opening round of the season.

The win by Brown tipped Don Schumacher Racing over the line for its 200th team victory – Schumacher taking five as a driver and 195 as a team owner.

Gray got past Jeff Arend, Alexis DeJoria and Jack Beckman to make it to the finals.

“Don has been great to me, and to be a part of that, it’s an awesome feeling for everybody down the line who has contributed to this, which started with Don winning the first one,” said Gray.

Meantime, Worsham got by Tim Wilkerson, Courtney Force and Robert Hight to make his way to the finals.

Not only did Gray take victory, he joined Ron Capps at the head of the Mello Yello points standings, the pair locked together on 244 points.

Capps was taken out in the first round by team-mate and defending Champion, Jack Beckman.

PRO STOCK
Defending Pro Stock Champion, Allen Johnson took his first win of 2013, beating home team-mate, Jeg Coughlin Jnr. Coughlin got down the track quicker than Johnson, but a superior reaction time off the line saw the win light in the 2012 Champion’s lane.

Johnson got  by Matt Hartford, Erica Enders-Stevens, and Jason Line to get into the final. Mike Edwards continues to lead the Championship – but was taken out by Coughlin in their semi-final affair.

Hector Arana Jnr stormed back into the winner’s circle in Pro Stock bike, taking his first win in over 12 months beating out Steve Johnson.

Arana made much of the fact that in recent seasons, winners of the Gatornationals have gone on to win the Championship.

“When my dad (Hector Snr.) won his championship, he won the Gatornationals, and Eddie Krawiec has done that the last two years. I hope to keep that trend going this year as well.”

Arana now holds a 29 point advantage over Johnson in the points standings.

The Mello Yello Drag Racing Series is now in hiatus until after Easter, with the next round happening at The Strip in Las Vegas over the weekend of April 5-7.