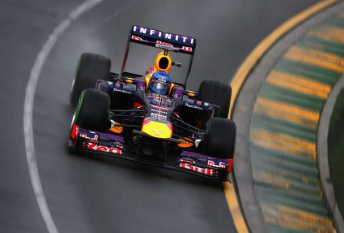 Red Bull Racing duo Sebastian Vettel and Mark Webber will share the front-row of the grid for this afternoon’s Australian Formula 1 Grand Prix after a frantic final two periods of qualifying.

Cold and greasy track conditons greeted the drivers for the 1100 start, which had been scheduled following yesterday evening’s postponement due to heavy rain.

Intermediates proved the order of the day until the very final minutes of Q3, where perfect timing allowed Vettel to shoot to the top of the order with just one second remaining.

The German abandoned an even quicker subsequent lap as it became clear that no one could challenge him.

Button and Massa both earlier enjoyed narrow escapes in Q2, moving out of the drop zone after the chequered flag fell.

The two McLarens of Button and Perez had both elected to switch to slick tyres part-way through the 15 minute Q2 hit-out, a decision that proved premature. Button was able to revert back to the inters for his final run while Perez persisted with a second set of slicks and will start just 16th.

Sauber’s Nico Hulkenberg and his replacement at Force India, Adrian Sutil, were the victims of the late Button and Massa efforts and will share the sixth row.

Williams rookie Valtteri Bottas also ventured onto slicks in Q2 and will start just one place ahead of team-mate Pastor Maldonado, who was eliminated in Q1 yesterday.

The 2013 Australian Formula 1 Grand Prix will get underway at 1700 local time.