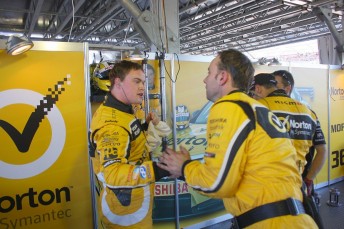 V8 Supercars has underlined its tough stance against post-race altercations between drivers by fining James Moffat for an indiscretion at Albert Park.

The Nissan Motorsport driver has been fined $5,000, of which $2,000 has been suspended until the end of the year, for “physical contact” with Scott Pye following Race 3.

After verbally expressing his displeasure with Pye, Moffat is understood to have shoved his fellow Dunlop Series graduate.

Moffat declined to comment when approached about the incident by Speedcafe.com.

Aside from the Race 3 frustrations, it was a highly positive weekend for the Norton-backed driver, who finished seventh overall after taking top 10 places in each race.