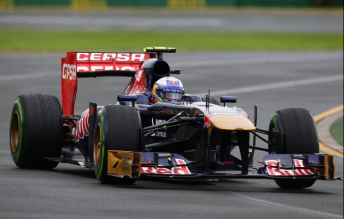 The 23-year-old West Australian started from 14th on the grid in his Toro Rosso, but slipped to 20th in the opening laps as he struggled for tyre temperature.

Ricciardo had been one of just four drivers to start on the medium compound tyre.

“At the start of the race, I struggled to find grip and it felt like I was driving on ice, as it took a very long time to warm up the tyres,” he explained.

“Afterwards, after about ten laps, I got up to speed and my lap times were not too bad, but by then I had lost too much time in the early stages.

“I think we have more homework to do when it comes to the tyres.”

Ricciardo’s day finally ended 19 laps from home when a cracked exhaust header required the STR8 to be parked.

“I reported back to the pit wall that I could hear strange noises and I tried to fix it by changing a few functions, but it was not to be,” he said.

“Not the ending I wanted for the first Grand Prix of the season, especially here in my home race.”

Ricciardo had earlier been out-qualified by team-mate Jean-Eric Vergne to the tune of 0.3s.

The Frenchman eventually finished 12th, right on the tail of an intense battle for ninth between Jenson Button, Romain Grosjean and Sergio Perez.