TIMELINE: The 2013 Australian Grand Prix as it happened

TIMELINE: The 2013 Australian Grand Prix as it happened 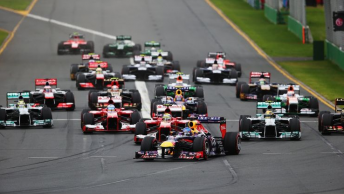 Hulkenberg will not take the start after a fuel system issue on his Force India. The 11th place grid spot will be left vaccant #F1

Warm-up lap now underway. The track is dry by the sky looks threatening and some rain is predicted #F1

It was also a tough opening lap for Ricciardo, who runs 20th on the medium compound tyre #F1

Massa reduced the gap to Vettel back to 1.8s on Lap 2 as Raikkonen takes fourth from Hamilton #F1

Replay of Webber’s start reveals a lot of clutch slip on the Red Bull. He didn’t appear to have KERS, either #F1

Webber pits from seventh at the end of Lap 5 for the medium compound. Grosjean and Gutierrez also in #F1

Vettel, Massa and Alonso are running nose-to-tail. The Red Bull seems harder on its tyres that the Ferraris  #F1

Vettel pits from the lead at the end of Lap 7. Massa leads Alonso and Raikkonen #F1

Massa pits from the lead at the end of Lap 8. He rejoins behind Vettel #F1

Raikkonen has now caught the back of Alonso. Both pit at the end of Lap 9 #F1

Order after rejoins is the same as before. Vettel, Massa, Alonso, Raikkonen. Margins now significantly bigger, however #F1

Hamilton, Rosberg, Sutil, Perez, Maldonado and Ricciardo are yet to pit. The two Mercs are on the super soft, the rest on the mediums #F1

Vettel and Massa are between 1 and 1.5s per lap faster than the two Mercedes entries at the moment as the different tyre strategies play out

Rosberg pits at the end of Lap 14. He rejoins ahead of Button in ninth #F1

Vettel, Massa and Alonso are nose-to-tail with the Red Bull tucked in behind Sutil’s Force India #F1

Sutil’s presence is helping the Mercedes entries close in. Seventh-placed Rosberg took 1.4s out of the leaders last time by #F1

Grosjean is also in for a second stop. Sutil is still leading and far enough ahead of Vettel to be out of the DRS zone #F1

Alonso takes his second set of mediums at the end of Lap 20. Could be a big undercut if the warm-up is good enough #F1

Raikkonen is still going in this second stint and has very good speed in his mediums. Lotus’ strength is coming into play #F1

Maldonado has gone off, beaching his Williams deep into the Turn 1 gravel #F1

The Alonso-Vettel-Sutil-Massa train has now caught third placed Rosberg, who has only stopped once #F1

Rosberg pulls off the road at Turn 4. That makes it easy for Alonso #F1

Webber and Ricciardo are ninth and 10th respectively. A top local result may require a splash of rain #F1

Rain would be ideal for Sutil, as it would mean he does not have to run the super soft #F1

Alonso is hustling Hamilton for second as the drizzle continues. Raikkonen is 12s up the road #F1

Hamilton pits immediately at the end of Lap 31 #F1

Raikkonen’s advantage over Alonso is out to 16.4s after that fight between the Ferrari and the Mercedes #F1

Drizzle appears to have stopped with Alonso knocking out a 1:31.84s lap last time by #F1

Massa pits at the end of Lap 36. Alonso has the gap to Vettel out to more than 5s #F1

Vettel pits at the end of Lap 37, covering Massa #F1

Alonso pits at the end of Lap 39. Sutil and Raikkonen take over the top two spots #F1

Rosberg confirms he pulled off with electronic issues #F1

Ricciardo’s Toro Rosso is being wheeled into the garage #F1

Hamilton pits from sixth with 16 laps to go #F1

Raikkonen takes the lead from Sutil at the end of Lap 43. Sutil still has to pit for the super soft #F1

Ricciardo’s car has reportedly had an exhaust failure #F1

Alonso moves around Sutil at Turn 3 on Lap 46. Can’t be far away from the German’s final stop #F1

Ricciardo: “It seems to be an exhaust issue. We’ve got quite a bit hole in the bodywork and I could hear some strange noises.”

Another dusting of light rain is expected before the end #F1

Hamilton and then Webber take Sutil. The German is down to seventh #F1

Gap at the front is 7.2s between Raikkonen and Alonso with little over five laps to go #F1

Raikkonen drops in the fastest lap of the race so far, a 1:29.27s as he closes in on his second Australian Grand Prix victory #F1

Raikkonen starts his final lap with a 11.5s lead over Alonso #F1