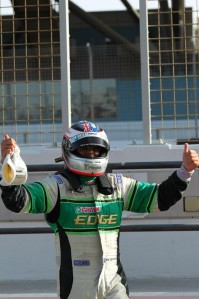 Like the Radical European Masters series, the Radical Middle East Cup which ran its finale at the Yas Marina circuit features two mini enduro races at each round.

Elgammal was also awarded the Christophe Hissette trophy for recording the most amount of fastest laps.

The former Sydneysider who now lives in Dubai, is the 2007 Supercars Middle East Champion and 2010 UAE GTB Champion (997 Porsche Cup Car) which he shared with Jonothan Simmonds.

“The Radicals require a very different driving style to GT’s and Touring Cars that I am used to, particularly in the throttle application, and it was good to develop and improve my skills and to be consistently fast throughout this season with minimal mistakes,” Elgammal said.