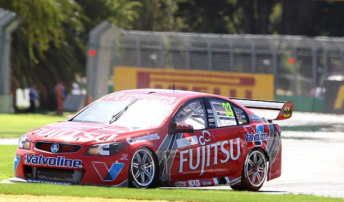 The reigning Dunlop Series winner led home Craig Lowndes and Fabian Coulthard at the end of the fourth and final 12 lap encounter.

Coulthard’s third place was enough to seal the weekend trophy following his three victories accumulated across Friday and Saturday.

Jason Bright was just 11th after a poor start and slow pitstop but secured second for the weekend regardless ahead of Will Davison.

Michael Caruso led a large portion of Race 4 before electing to complete his compulsory pitstop on the penultimate lap, from which he emerged 12th.

Coulthard had led the early laps after another strong start from pole position but fell off the road at Turn 3 following his Lap 5 pitstop, allowing McLaughlin (who had pitted on Lap 4) and Lowndes (who pitted on Lap 2) through.

Reynolds ran six laps on his first set of tyres and rejoined second to McLaughlin, but could not hold off Lowndes and Coulthard as he struggled for grip on his out-lap.

Mechanical problems accounted for James Courtney, Garth Tander, and Jonathon Webb while Russell Ingall and Mark Winterbottom were on the sidelines after an opening lap melee.

The grid required a major reshuffle less than half an hour prior to the start following the disqualification of eight cars from the Race 3 result.