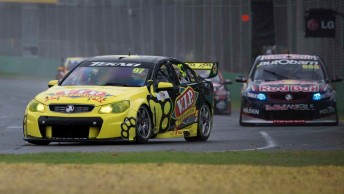 Shane van Gisbergen, one of eight drivers excluded from Race 3

Both Red Bull Racing Australia cars and the two Tekno Autosports Commodores were among eight cars disqualified from the results of the third V8 Supercars race at Albert Park.

Craig Lowndes and Jamie Whincup along with Race 3 winner Shane van Gisbergen and Jono Webb were all excluded from the results following an engine irregularity.

The other cars banished from the race were the Lucas Dumbrell pair of Dean Fiore and Scott Pye along with Nissan duo, Todd Kelly and Michael Caruso.

The official line on the sensational sequel to the race from stewards was that the teams admitted that their ignition timing exceeded the maximum allowable variance.

Red Bull team boss Roland Dane said on Channel 10: “We were outside the rule on the ignition timing for both our cars. It’s a technicality but the rule is black and white so we’ve been excluded.”

“It’s pretty annoying that we’ve transgressed like that.  It’s just a stupid mistake. Craig (Lowndes) was in with a shout for second or third overall for the weekend.”

Jack Daniels Nissan team leader Todd Kelly said: “The weekend was going pretty much superbly until that news and it’s a real shame.

“It’s obviously a penalty that has to be applied, they’re the rules and unfortunately there’s been an oversight on two of our cars, which has caused us to be in breach of those rules.

“It’s hard to be too tough on anybody here for that because of the hours the boys have been doing and the time we’ve spent on the dyno and trying to turn all the engines away for this weekend you could easily see how that oversight could have crept in.

“The actual breach is of no real significance whatsoever performance wise, but it is a breach of the rules , so I respect the action that they’ve taken, it’s just a shame that it’s happened, so we’ll definitely be tightening up our procedures in the future to ensure it doesn’t happen again.”

The non-championship grand prix meeting wraps up today with the fourth race of the weekend.