Development race pace the next challenge for Lotus

Development race pace the next challenge for Lotus 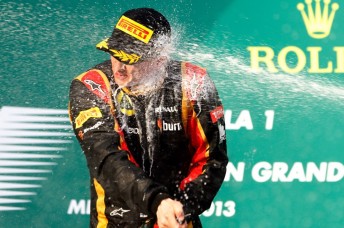 The Lotus F1 Team’s ability to keep up with the development pace of its better financed rivals is set to determine whether Kimi Raikkonen can turn his second Australian Grand Prix victory into a second world title.

Raikkonen eased away from Alonso in the closing stages despite having completed one less stop than the Ferrari, underlining the tyre life strength displayed by Lotus last season and in the 2013 winter testing.

“Our plan was to do two stops and though it’s always difficult in the first races to know when to stop and not go too early, we got it exactly right,” said Raikkonen afterward.

“We followed the plan and it worked out perfectly for us. I could save the tyres and go fast if I needed.  It was one of the easiest races I have done to win. Hopefully we can have many more of these races.”

Whether Lotus can develop its 2013 car at the same speed as its key rivals is yet to be seen, although Raikkonen says the team’s late-season form last year, which included a maiden win at Abu Dhabi, is proof that it is possible.

“There was a big question mark last year if our team could keep it up with the bigger teams,” he said.

“Of course it’s not going to be as easy for us. I’m sure we have the people and all the tools to make it but money is a big part of the whole thing and for sure we don’t have the same budget as the Ferrari or the Red Bull or Mercedes.

“We did see last year that we did pretty well on the money and on the things that we have.

“It’s a long season so if you do things right it will go nicely, but one thing can change the whole year and if you do a few things a little bit wrong it will go downhill after that.

“We just have to do our normal things like we did last year and put in a good effort.”

In addition to developing its current cars, this year will require teams to gradually shift their resources to the substantially revised 2014 regulations, which include the introduction of 1.6 litre V6 turbocharged engines.

Today’s AGP win is the second of Raikkonen’s career, with the first occurring in 2007, the same year he won the World Drivers’ Championship with Ferrari.

The Enstone-based team has won at Albert Park twice before in 2005 (with Giancarlo Fisichella) and 2006 (with Fernando Alonso) under the guise of Renault. It won the Constructors’ Championship in both of those seasons.

The 2013 Formula 1 World Championship continues in Sepang, Malaysia, next weekend.