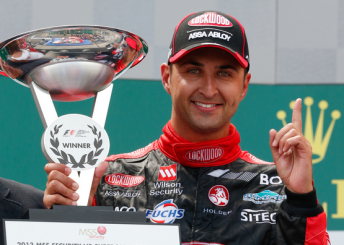 Fabian Coulthard on the podium

BJR team-mates Coulthard and Jason Bright finished first and second respectively for the weekend, with the Kiwi winning three of the four races.

Richards subsequently passed away nine months after the event.

“I had my first pole position, first race win and first round win and there’s no better person to dedicate it to than JR,” said Coulthard.

“He is a good close friend and family member of BJR. After his success here a couple of years ago it could not have been better. Charlotte and the kids were here, it’s a pretty emotional time.

“JR had massive success at BJR and massive success here. We all miss him. He is one of those blokes that will never be forgotten and it’s unfortunate what has happened. What else can we say? I am sure he is looking at us, high fiving the both of us.”

The BJR cars permanently carry small sticker tributes to the memory of Richards.

“I was thinking coming into the weekend how he (Richards) went here a couple of years ago,” team owner Brad Jones told Speedcafe.com.

“I think about him a lot anyway, as I’m sure everybody who was ever closely involved with him does.

“He did an amazing job that weekend (at Albert Park in 2011) and I’m sure if he was in the car this weekend he would have done an amazing job again.”

Coulthard’s three wins this weekend add to the single victory John Bowe took for the team at the AGP in 2005 and the two V8 Supercars Championship race wins scored by Jason Bright in 2011.