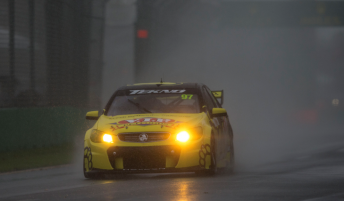 Van Gisbergen cuts through the gloom on the way to victory

Starting ninth on the grid, Van Gisbergen cut his way to the lead by the start of the second lap.

The Kiwi’s speed saw him retake the top spot by the end of Lap 3 before charging away to a stunning 12.6s victory.

Rain in the hour leading up to the race ensured all cars started on wet tyres.

Drizzle continued to fall for the most part before another heavy downpour on the final lap. 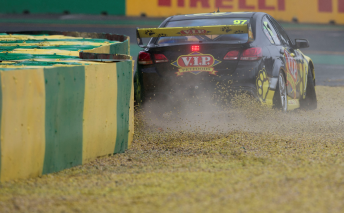 Van Gisbergen was lucky to survive this off on Lap 2

The use of wet tyres meant there were no compulsory pitstops in the 12 lap journey.

Much of the race’s action occurred between the four Nissan entries, with all four Altima drivers showing they were not afraid to swap paint with one another.

The intra-team battle was eventually won by Michael Caruso in ninth.

Jamie Whincup made steady progress from 25th on the grid to finish 13th, one place behind Mark Winterbottom, who lost ground with an off.

Scott McLaughlin was just 24th after his car failed to fire on the warm-up lap, necessitating a pitlane start.

Maro Engel and Garth Tander both failed to see the chequered flag due to electrical issues for the Mercedes and bent steering on the Holden.

Race 4 will take place tomorrow afternoon, with Coulthard and Bright to share the front-row based on cumulative points from the weekend so far.