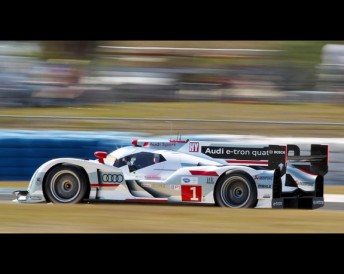 The #1 Audi took pole for the Sebring 12 Hours

Former Penske IndyCar pilot, Ryan Briscoe has started his return to the American Le Mans Series in the best possible way by taking pole in the LMP2 class for the Sebring 12 Hour, whilst up front the Audi dominance of LMP1 continues, the German marque setting one-two.

Marcel Fassler set the pace after battling with Alan McNish for the front row position. Third place was taken by the Rebellion Racing machine of Nick Heidfeld.

The battle for P2 pole position was between the Sydney-sider and fellow HPD racer, Ryan Hunter-Reay. In the end, it was Briscoe – who is joined by Marino Franchitti and Scott Tucker – who will start the 12 Hour race from the pole and seventh overall.

Colin Braun ended the PC division on pole, with the DeltaWing (running under P1 specifications) the slowest of the P1 cars in the middle of the PC class. Former F1 pilot Gianmaria Bruni took his Ferrari F458 Italia to pole in GT, whilst Andy Lally starts GTC (or ‘Formula Porsche!’) from pole.