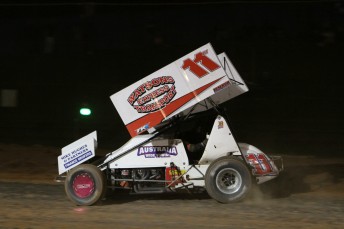 Sydney local, Ian Madsen has beat out a crack field to win the preliminary night of the 2013 $50,000 to win Scott Darley Challenge at Sydney Speedway.

After a litany of yellow light stoppages in the first stanza of the race, up front the battle for the lead was between pole-sitter James Thompson and Ben Atkinson.

Madsen was able to advance on the top two that were battling for the lead taking the fight to three-wide at one point. Madsen split the other two to take the lead. Thompson slipped into second and then spun whilst trying to lap Max Dumesny – who had his own share of dramas.

That would be the end of the night for Thompson, whose right rear deflated in the process of the spin, one of his best runs in quite some time.

With Madsen crossing the line from Northern Territorian, Atkinson, all eyes were on American Shane Stewart who has made a huge claim towards the $50,000 to win on Saturday night.

Having destroyed his Monster Energy machine during heat racing, the Monte Motorsport team cobbled together the Oklahoma racer’s car for the C-Main, which he duly one. Advancing to the last chance qualification B-Main, Stewart was able to advance into position three and make his position from the rear of the field.

He carved his way forward to end the night in third placing, helping his points haul heading into the final night.

The event, which celebrates the life of Scott Darley, concludes tonight.