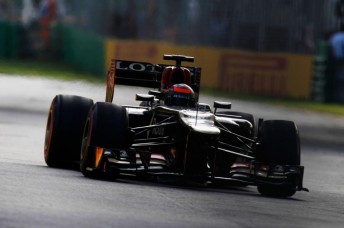 The Frenchman recorded his best effort of 1:26.93s early in the hour session before rain hit at the 15 minute mark.

Drivers enjoyed the shelter of their pit garages as heavy rain lashed the circuit, with 20 minutes passing before Felipe Massa cut the first of the wet laps.

Conditions improved sufficiently for intermediate tyres in the final 10 minutes, with Grosjean also the fastest of those to use the semi-wet rubber.

Sebastian Vettel was forced to sit out the final 10 minutes after electronic problems saw his team ask him to abandon the #1 Red Bull on the circuit.

Qualifying for the opening round of the 2013 Formula 1 World Championship is set to commence at 1700 local time.