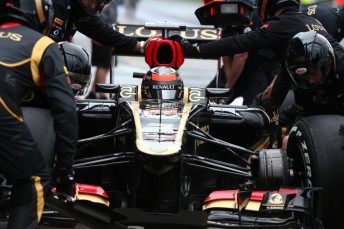 Heavy rain has seen the final two periods of qualifying for the Australian Grand Prix delayed until Sunday morning.

Q2 is scheduled to get underway at 1100 as part of a revised timetable.

The wet weather arrived at Albert Park some three hours before the qualifying session was scheduled to get underway, with standing water seeing a delayed start to Q1.

The 20 minute Q1 session was littered with incidents, many of which occurred at the high-speed Turn 11-12 chicane.

Felipe Massa and Esteban Gutierrez both suffered heavy accidents at the exit of the complex, with the latter’s Sauber stranded when the chequered flag fell.

Nico Rosberg set the fastest Q1 time of 1:43.38s as drying conditions saw a scramble for intermediates in the final minutes.

The Caterhams of Van der Garde and Pic both tasted the fences during Q1, with the Frenchman requiring a dispensation to make the grid after failing to lap within 107 percent of Rosberg’s time.

Lewis Hamilton also suffered a scare when he spun wildly at the exit of Turn 1 in the opening minutes. Despite a damaged rear wing, the 2007 world champion managed to set the 10th fastest time.

Downpours saw the start of Q2 repeatedly delayed until the FIA finally announced that it would take place on Sunday.