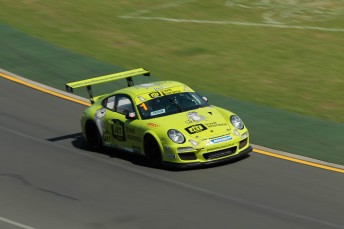 After finishing third on the track in the opening race last night, officials moved the Jet Travel Insurance Porsche to second after they relegated Nick Percat back one spot for his forceful move midway through the opening event.

Baird got a strong start and went side-by-side with Race #1 winner Steven Richards into the opening turn. Richards initially fell back to fourth, but then ran wide later in the lap and the Laser Racing Porsche was back down in ninth.

Baird was under plenty of pressure from the Coates Hire Porsche of Percat, but was able to build a small gap through to the finish.

Behind, Warren Luff (No Second Chance) got by Michael Patrizi (Ausdrill/Onsite Racing) 911 to take third place.

Richards worked his way back up to sixth at the finish, after a tough battle which included Shae Davies (Team Kiwi Racing), Steve Johnson (Hunter Sports Group) and Matthew Kingsley (Action Tyres & More).

Max Twigg in the Permagard Automotive Porsche backed-up his Elite Class win in the opening race with another victory and seventh place overall.