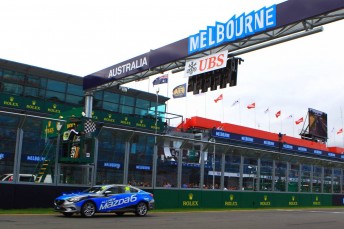 Former Australian top-order test batsman Brad Hodge is one race away from clean-sweeping the Mazda6 Celebrity Challenge at Albert Park.

Hodge led the entire race, finishing ahead of Underbelly actor Jonathan LaPaglia and chef Shane Delia who had an exciting battle for second and third.

“It felt good leading the pack from start to finish today,” said Hodge.

“I managed to stay out of the way of the carnage which was good – though I probably missed the fun and need to be involved in the pack a bit more!

“I think tomorrow I’ll try and get off the line and control the race again, being in front means you can dictate the race from there and control what you do.”

Scottish cyclist Sir Chris Hoy managed to overcome his second-last place finish on Friday, jumping an impressive 15 places to finish fifth. Before the first corner Hoy had already passed four cars and made his way through the field with relative ease over the remaining four laps.

Dominating the women’s field yet again, Australia’s Olympic golden girl Anna Meares managed to place fourth and is well set for a podium finish in the final race on Sunday. Model Kate Peck also consolidated on her performance yesterday finishing 10th in front of Jessica Gomes.

From the field of 21, four drivers failed to finish after taking some heavy knocks during the race.

Scott McGregor had his front and rear bumpers hanging off after only two laps before running off into the sand soon after.

The Mazda6 Celebrity Challenge continues tomorrow with the final race from 12.40pm.