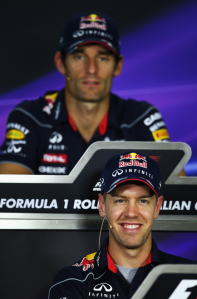 While the technical and sporting regulations have remained relatively stable year-on-year, revisions to the front-wing deflection tests and the Downforce Reduction System activation in qualifying crack down on areas that the Milton Keynes-based squad is said to have perfected in recent times.

The front-wing load tests have been gradually beefed up since the height of the flexi-wing allegations against Red Bull in 2010, while the DRS can now only be used in the specified zones in qualifying, rather than over the entire circuit.

The superior downforce levels of recent Adrian Newey-designed Red Bull cars had often seen Webber and Vettel able to make better use of the DRS in medium-to-high speed corners than their rivals.

“We’ve had a lot of different front wing regulations in the last few years,” said Webber of the first issue.

“It’s normal in Formula 1 that we have to adjust technically around new rule changes, sometimes within the season itself, not just at the start of the season.

“We obviously make the car fit within those regulations and we will have to adjust the car around the findings of how that front wing will form in those new regulations, so that’s fine.

“In terms of the DRS, it’s not a big thing for us. I think that we have been ok in qualifying in the past, also quite strong in races so the effect of the DRS, the delta of the DRS, all those type of things which is not something that we’re having a huge eye on.”

Added Vettel: “I think most of the changes to the front wing came in trying to stop us so something that we maybe did better or that the others couldn’t do and then there’s just one more thing, so it’s not a new situation.”

The team’s latest car, the RB9, did not shine as brightly as some of its rivals in the pre-season tests, but many believe that the squad was simply unwilling to show its hand.

Vettel himself says he remains unsure of where the three-time reigning Constructors Champions sit in the 2013 pecking order.

“We did a lot of work back at the factory, we’ve arrived with what we think is best and we’ll find out if we have gone in the right direction,” he said.

“It’s clear where we want to be. We know that it’s going to be difficult as it will be very tight.

The opening Formula 1 practice session of the season gets underway at 1230 local time this afternoon.