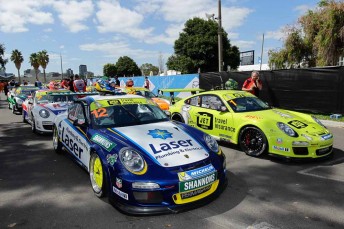 Steven Richards has won a tight opening race of the Porsche Carrera Cup round at Albert Park.

Richards in the Laser Racing 911 made a great start from second on the grid to head pole sitter Nick Percat.

On the run down to Turn 3, Craig Baird got around the Coates Hire Porsche of Percat.

The Jet Travel Insurance 911 of Baird then set about catching Richards, but this allowed Percat to force his way by on lap 4 of 8.

The trio battled hard over the closing laps, but it was Richards who held his nerve to take his second straight Carrera Cup win after scoring victory in the final race on the streets of Adelaide two weeks ago.

The Carrera Cup will have another two races this weekend, including tomorrow’s second encounter at 12.50pm local time.