Lucas Dumbrell Motorsport’s Holdens are running with a host of new branding this weekend following the team’s strong start to the season in Adelaide two weeks ago.

The Triple Eight customer outfit has both of its drivers in the top 16 of the championship after the opening event, with main series rookie Scott Pye an impressive 10th.

The sister entry of Dean Fiore, meanwhile, is sporting bonnet sponsorship from smallgoods firm Bertocchi – a relationship that the team hopes it can grow beyond its current one-event duration.

“The Clipsal 500 was a big weekend for us, I think we surprised a lot of people, particularly with how fast Scotty was,” LDM team owner Lucas Dumbrell told Speedcafe.com.

“Sponsorship is extremely hard to find at the moment and you have to justify people’s spends more than ever. Sponsors don’t come on board just because they like the team, it needs to have a quantifiable return. 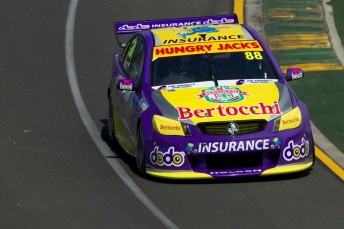 “Top 10s are definitely something we can achieve this year. It’d be great to be there as regularly as possible, and if we can get into the top five at some stage that’d be fantastic.”

Added Sargent Security general manager Peter Harris: “It’s a good fit with Scott Pye being a young driver who is growing like we are. We see ourselves growing together in V8 Supercars.

“We’re mainly here for branding, but it also allows us to give back to our clients through ride days and those type of programs.”

“Supporting two drivers in two different categories gives us the opportunity to explore how well motorsport will work for us and particularly which category will work best for us,” said a Bertocchi statement on its AGP involvement.

“We have a reasonable investment as a broadcast sponsor so having a couple of cars going around complements that and gives our guests, staff and customers someone to cheer for.”